Take Back NYU! Week - basically a group of student protesters overtook the NYU cafeteria - which is about 3 or 4 blocks from our apartment. (I didn't even know there WAS an NYU cafeteria.) I followed the story on NYU Local - a student-run Web site. It was also on Gawker - some pretty funny snark about the situation.

I'm not officially part of the NYU family, but I reside, for all intents and purposes, on their campus. My sleep was disrupted by the shouts of protest - and it sounded so much like an athletics event. And there's my thought - "A HA!" What NYU students need is a sports team where they can scream and holler together. There are 30K kids here - and they have nothing athletically unifying them. I know this is a middle-of-the-country idea and isn't at all possible here, but that thought came to mind while I laid in bed listening to the roars on Thursday night.

The TBNYU! list of demands were a mix of rational (I guess) and ridiculous. Their first demand was amnesty (Gawker commented - if you want that, stay home, no problem) - but they also wanted something about Gaza and sending old projectors to a school there (???). The main issue, however, seemed to be that they want to see the books - the money.

Here's what I say - you go to a private school. You can go to a state-funded school and find out all about your university finances.

Shawn was surprised that the offending protesters (those who wouldn't leave - just a handful) lost their NYU housing. Guess what? Dorm living isn't a right - it's a privilege and you sign a code of conduct contract. And a two-day protest shutting down a campus building is a clear violation of that contract.

Anyway - I have no business talking about this, but it's happening in my own back yard. I don't understand it all, and I really don't want to. But for once, I find myself on the side of "the man." And just want the whole thing to go away... We'll see.

I got a comment about the Jane Seymour "open hearts" necklace. Here's a picture: 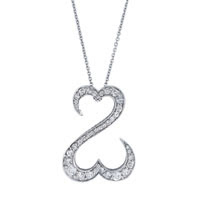 You're telling me that doesn't look like a woman's chest on the top and a woman's behind on the bottom? Yes, spatially I guess it doesn't make sense because the boobs and butt are on opposite sides of a woman - but this is what I see when I look at these pieces of jewelry and it creeps me out a little. I know that says more about me than the jewelry, so there you go.

I'm bold enough to return and and admit that I returned to the scene of the crime!!


It remains a streeeeeetch (and if one can see the Virgin Mary in a Dorito, then why couldn't someone see stretch marks in jewels and pendants too?)...

And I stand confident in my belief that the offending (?) pendant bears more of a likeness to the Average White Band than it does to any body parts (including stretch marks).