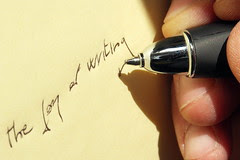 Bah! Not as long as I have anything to say about it. I write letters weekly to people - my Gran, Aunt Norma Lee, etc. I would write to more people, but it's hard to have a one-sided dialogue (well I guess that's just impossible) and almost everyone's chosen medium is e-mail (including mine in most cases)! Regardless, I have joined the Letter Writers Alliance, which is a group trying to keep the handwritten letter alive. I love stationery too much to give it up!

Email ThisBlogThis!Share to TwitterShare to FacebookShare to Pinterest
Labels: write