We Sell Sea Shells by the Sea Shore 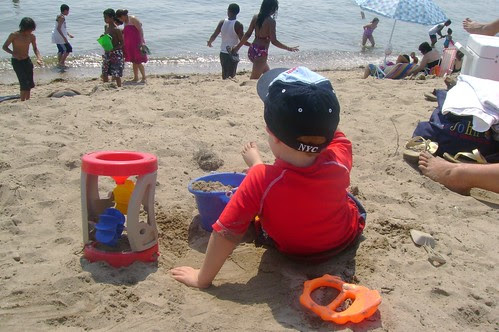 Sweet little Owen Max, looking out to the sea shore.

We had a lovely weekend in Connecticut. First we took a taxi (Taxi, Taxi, Riding in the Backseat) to Grand Central, then a Metro North train to New Haven. Then we got a rental car, drove around New Haven, seeing Yale and all the places Shawn lived during his two years there. (It was only two places, in his defense.) We saw the overlook, and then drove to Branford, CT, where our motel was. We checked in, went to a local diner for dinner and then drove around, trying to catch a glimpse of the sea shore! We spotted a Kohl's instead and indulged in a little suburban retail therapy (I got a purple stripey oversized sweater, a purple dress and a new wallet for less than twenty bucks!). There was a bit of a scuffle when Owen really wanted a toy... but with Shawn's help I managed to not plunk down $10 for an overpriced, under-fun set of little cars. Owen was happy with gum we picked up at Walgreen's near our motel...

Saturday morning, after a nice rest in separate rooms (which felt weird after a week of close quarters in the studio apartment), we stopped at Walgreen's again to buy beach towels (75% off ... and I still don't know where all of my beach towels are...wouldn't think you could lose so much in so little space, but I have magical powers I'm afraid). We got a couple chairs for $2.50 each and water to last us through the day. Then it was off to Hammonasset State Park. We parked and set up shop between life guards and in front of bathrooms - very convenient for an almost-4-year-old, and even for this 27-yr-old! 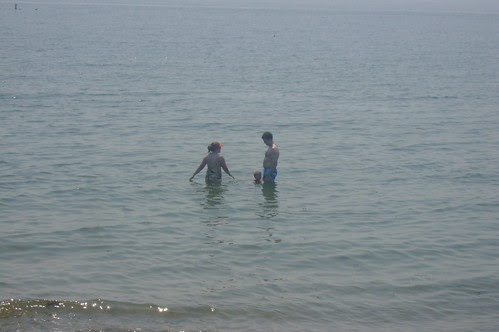 The weather wasn't too bad, and there was sand, water and Owen was in heaven. We stayed far too long - lunch from a nearby food stand and in-and-out of the water. I did my best to keep out of the sun and continued to spray on sunscreen, SPF 50. We lathered Owen up MANY times, and his bathing suit comes with a cute swim top as well as shorts (can't be too careful with his fair, fair skin). Owen didn't get any suburn (except one small, weird patch under his right eye), but Shawn got the worst of it - his chest, back and backs of his knees. Beth had a few random sunburned spots, and Mama and I tied for weirdest burns - the tops of both of our knees, the inside of my mom's arms, my left elbow and ankle (?!) and who knows what else. 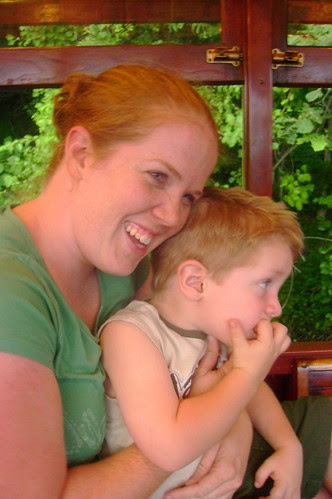 After a relaxing stay on the sea side, we packed up and went to the Nature Center in the park, did a look around at some of the things they had there, and then drove to the Trolley Museum in Short Beach, CT (there are signs for it along I-95, and once we said it, Owen was dying to go there). Of course we get there at 5 pm, and the stupid museum closes at 4:30 BUT they have a sunset tour, and we can come back and ride the trolley/see the sunset over some marshes if we come back at 7. So we go to a restaurant, have a leisurely dinner and come back to wait for the trolley. Owen is beside himself with excitement. And it really was fun. Weather was cool - our sunburns hadn't REALLY set in yet, and the trolley car was a restored one from New Orleans, complete with adjusting seats (they can face either way) and replica ads from the 1940s, when the car was first built and running. We got to look in the museum a little while we waited, much to Owen's delight, but the shop was closed, much to our shopping enthusiasts' chagrin.

After the trolley ride (at the end of which Owen was asked to clang the bell and open the door for all the passengers - all 10 of us), we talked Uncle Shawn into taking us to Wal-Mart for aloe and other sundries. I was salivating over the cheap prices of general goods - razors, cereal, etc. My mom got us a giant box of Honey Nut Cheerios (one of Shawn's faves), and then it was back to the motel for baths and coating ourselves with aloe. GEEZ!

On Sunday morning, we had breakfast and headed into New Haven after check out to see the Eli Whitney museum. There's also a water works there, and a waterfall captured Owen's attention. Plus a covered bridge made for fun photo ops, or at least TRYING to get good shots. In looking for a bathroom (seems like our time was constantly divided between looking for bathrooms), Shawn opened a door, and a few minutes later an alarm was going off - apparently a delay... We found a bathroom in the other building and skee-daddled off to the Yale Bookstore.

Of course we were thirty minutes EARLY for this store's opening, so we wandered around campus until we could go in and buy things. I didn't buy anything Yale, or anything I couldn't have bought here in the city. Also the prices were the same, since it is a Barnes & Noble, but my mom did find some good souveniers for her pals back in I-town.

Finally it was lunch at a Yale landmark (beats me what it's called), and then a search for a gas station that included a giant loop around New Haven. Shawn dropped us (and our 14 bags) off at the train station, returned the car and met us back in the lobby (which had neat model trains under glass for Owen to look at and jump around about). We caught our train back to NYC and were at Grand Central before 5 pm. There's an outpost of the Brooklyn-based Transit museum in GCT, so we were able to get some subway memorabilia, including an A-line subway car that will work with Owen's current Thomas the Tank Engine railway cars and engines.

Then we took one more taxi home, left Shawn to rest and headed down Broadway to SoHo to shop at Pearl River, home of all things Chinese - silk purses and journals, fans and even plastic toys. Owen talked me into getting him a $1 helicoptor, and I got him some Thomas candies with Chinese writing on the box (too funny). I got myself a little coin purse that has a girl swinging and the tagline "Mood Swing" - approps, no? On the way to Pearl River we found a vendor of bags on the street - something my mom had wanted to do for a true NYC experience. We didn't talk her down too much, but my mom did get a gorgeous purple handbag for a very reasonable price. Jealous much? I'll have to start paying more attention to those vendors and carrying bits of cash to try to get a deal!

Finally it was time for supper. After all the eating out we'd been doing, a restaurant wasn't the tops on anyone's list, but none of us were up for cooking either, so to Cozy's we went. Shawn and I typically go there after church on Sundays, so we were later than usual and it was quieter/more empty. We had a nice, semi-light supper then headed back to the apartment for much needed rest and packing.

This morning it was up at the crack of dawn for the Dial 7 driver to pick up my sweet, sweet family, and they made their way to LGA. The first flight was delayed, but they were still able to make their connection in Memphis. Now they should be in the Big I, with Beth making her way back to her new apartment in L-town.

It was a fantastic, exhausting trip ... and not just the Connecticut jaunt, but the whole thing. I wouldn't change anything (except maybe to not be working and able to spend the entire 10 days with them), and I felt like we got so much done and they were able to see so many things.

The first day after a visit is always the hardest - seeing Owen's left over juice boxes in the fridge, or Noggin' coming on when turning on the TV this evening after work... My heart is so full of love for that kid, for my mom and my wonderful sister. Even though I was stressed out at times and not the nicest Mari, I hope they know how much I love them - and appreciate the effort and cost and time they took to come visit me and give me a little more home in this big, cold (well hot) city...where it's so easy to be lonely in a place with over 8 million people. I am so lucky and blessed. And home is always with me, even when those I love are not... I just have to keep remembering that.

Oh how this caused me to harken back for a brief moment to school book reports on Eli Whitney!!