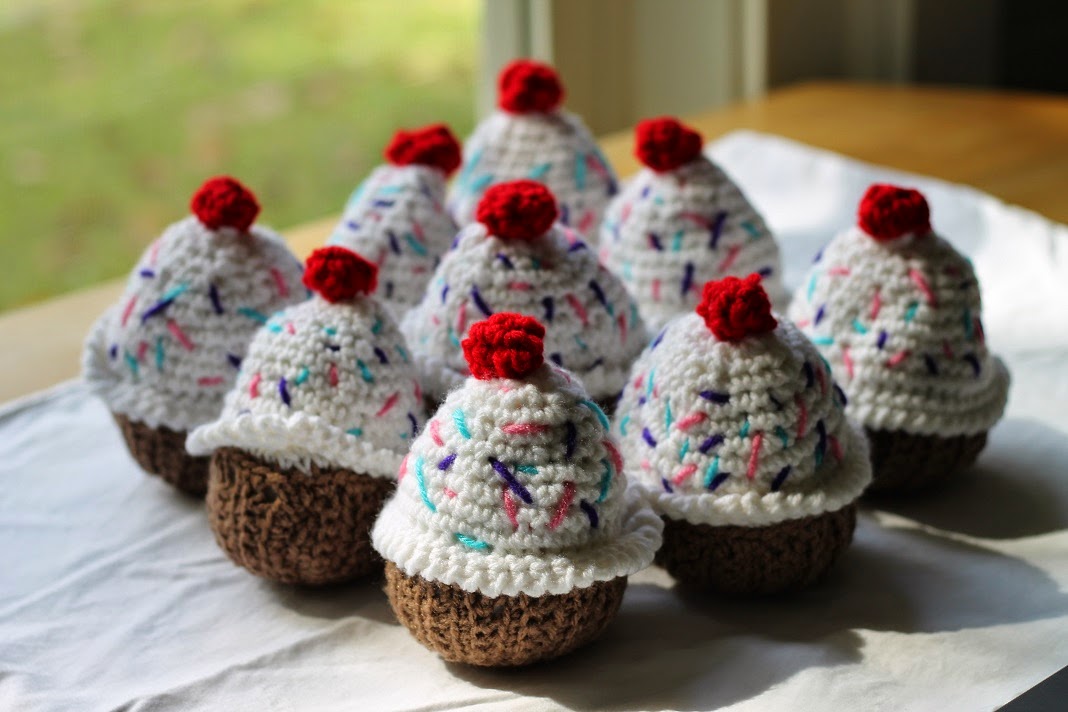 Today Jane celebrated her birthday at school. Two kids of the nine in her class share a November 8 birthday! There was a birthday celebration last week and will be another next week (in addition to this week's two). That's a lot of cupcakes!

Instead of participating in the sugar rush, which is something I shield Jane from as much as humanly possible, I decided to provide a regular snack of some of Jane's favorite foods -- cheese, peanut butter crackers and strawberries -- as well as pretend crochet cupcakes for the kids to take home. The kids -- and adults -- really seemed to like them. Her teacher also said the kids ate that snack much better than they usually eat.

I got to go to her birthday celebration snack time, and I took pictures and a short video of her friends singing "Happy Birthday" to her. Just precious.

Each crochet cupcake took me about 45 minutes - 1 hour to make, depending on how into the TV show I was. I thought I was finished at eight but then found out a new girl came to class. Thankfully I had enough time to make nine!

I looked at several crochet cupcake patterns online, but I ended up making it up a bit as I went along. I've made a crochet cupcake baby hat and this was like that, although instead of top down I crocheted bottom up. I started with a brown circle of about 3 rows of single crochet, then chained 6, turned *single crocheted 5 in the back loop only, slip stitched into the circle and then again in the next stitch of the circle, then single crocheted 5 in the front loop only, chained one, turned, repeat from * around and then slip stitch the "tube" of the cupcake wrapper together. Then I crocheted around the edges to make the "top" of the cupcake wrapper.

I switched to white and crocheted in the back loop only for two rows then started decreasing somewhat evenly. (Single crochet 10, then single crochet 2 together, etc.) until I got close to a top. I stuffed and sewed the top closed. Then I added a row of reverse single crochet to the free loop of the very first row of white to make the icing pop (and cover up the raw edge of the wrapper).

I did the "sprinkles" differently on some of the cupcakes. At first I put them on before I stuffed and sewed up the white part, but eventually I just started adding them at the end after everything was stuffed. I think they could easily come out if pulled on, although I did try to weave in the ends to give them a little staying power. They're just random stitches in three colors to look like jimmies.

Jane will have a cake at her birthday party, and along with the sweets and treats she gets to have while celebrating others' birthdays I think she'll have enough! I hear the siren call of food dye, especially for sprinkles on the top of her cake. But I'm holding firm to my belief that I shouldn't feed her any food dyes and as few chemicals as possible. Even on, or perhaps especially on, her birthday.
at November 04, 2014