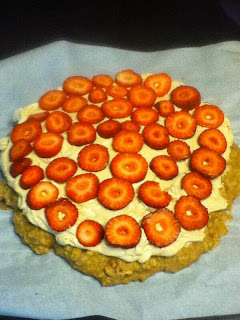 I've been a bit obsessed about the idea of a birthday party for Jane, which we'll have when we're visiting her grandparents just before her actual birthday. I spent a fair bit of time pinning, planning and thinking. And like most of my grand plans, this one has been scaled back considerably. Gone are my ideas for rainbow everything, including trying to make a rainbow layer cake (with fruit and veggies as the dye). Even so, I'm still focused on feeding Jane whole, good foods as much as I can, and I don't want that to change even at her birthday party.

A friend suggested a fruit pizza, but all the recipes I found were a heavy sugar cookie crust with a cream cheese and sugar frosting. Tasty for sure, but not what I want to put in Jane's tummy. I kept googling and found a healthier version on The Yummy Life.

But after my baking disaster experience of Christmas past, I knew I needed to test things first. So yesterday Jane and I did a test pizza. I didn't have a lot of fruit, so it was just strawberries. (The idea for her party pizza would be rainbow colors then cut the pizza in half to have a "double" rainbow effect.)

Jane wasn't especially helpful, and this was our first time trying to do a project together in the kitchen. I only got really upset twice, which is pretty good for me. I'm finding my patience is very tested at this age (mine and Jane's) ... but that's another post entirely. We had on our aprons, we had our ingredients and her step stool (made by her daddy, and I can't believe I don't have a post about that). We got to work.

The recipe itself was very easy and things came together fine. The peanut butter and Greek yogurt mix actually turned into a frosting-like consistency, which surprised me. Jane loved licking the spoon on that one too! She kept asking for "bite?"

My pizza pan is bigger than 12 inches, so I didn't spread the oatmeal cookie dough crust out to the edges. I think I should have, because that would have been a thinner crust, which would have been better. And I had twice as much frosting as I needed -- I think if I'd only put half the recipe on the crust it would have been less overpowering (Shawn didn't like the frosting and doesn't think we should serve this at her party because it's a little weird). I also should have had more fruit and/or really layered on the strawberries more than I did. More fruit would have cut the creamy peanut butter yogurt intensity I think.

I also wonder about making cookies -- just dropping and pressing balls of dough -- and then icing and topping with a bit of fruit. Maybe that would be more palatable? (Although that loses the option of a double rainbow it would be cheaper since there wouldn't be so many varieties of fruit to buy.) I don't want to make something that no one wants to eat. But I also don't want to just buy a grocery store cake and pump my kid (and others' kids!) full of sugar and food dye and the like. What's a pseudo hippie mama to do?

To satisfy others' needs for cake (and maybe in lieu of the fruit pizza entirely) I am planning to make a couple bundt cakes of some sort and using a pumpkin colored icing (colored via actual pumpkin puree if it actually works). The idea being to stack them and make it look like an actual pumpkin, since Jane is our pumpkin girl. More testing to come.
at September 20, 2013