Today has been OK. I went to have a blood test and then continued on my way to donate blood. That was an ordeal, taking over two hours and left me with numb-ish lips and a very sore arm. I hate doing it so much but these people have a way of pestering me into doing it more. I much prefer straight whole blood donations (and the additional benefit of having my body replenish the blood). I saw lots of crazies wandering around, and I'm sure more will be coming out tonight! The lines in front of Ricky's costume shops are ridiculous! Maybe the costumes go on sale today so that's why everyone waits until the last minute? I doubt it though! 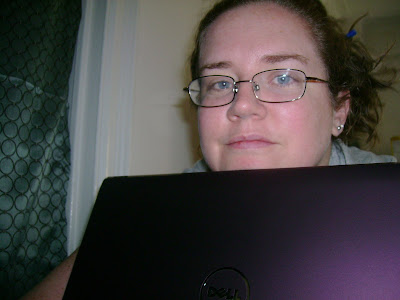 Here's a picture of me with my new toy, a Dell Laptop on which I'm writing this, my first blog post. Yes, it's purple. I don't know why that color makes me SO happy, but it does. And apparently it's got to the point where I see other colors when I look at purple (i.e. a work related thing I thought was blue is actually purple). Could it be time for purple rehab? Hopefully it's not that serious. And I'm pretty sure my love affair with the color won't end. I've had an affinity for the hue since high school for sure, when my Gran made me my gorgeous purple afghan. There could be worse things.

I'm anxious for Shawn to get home so he can set up the wifi connection and get everything in secure mode before I really use this computer a lot. Windows 7 so far seems OK. Kind of similar to a Mac with the floating toolbar thing at the top, but I'm digging it. Because I mostly play with it offline I've been really enjoying Majong again. HA. I am terrible at it though. The back lit keyboard was a free feature that I think I'll really like, although I assume it will eat battery life, so maybe there's a way to turn it off.

Shawn will be home tomorrow, and yesterday was the fifth anniversary of our meeting -- at a Halloween party in DC.

PS I'm starting NaBloPoMo tomorrow, so you have at least one/post per day from me in November to look forward to. I did it last year, and hopefully this new computer will make that goal even easier to attain.
at October 31, 2009