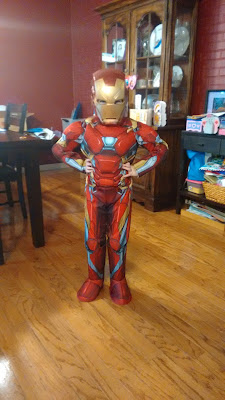 Jane dressed as Iron Man this year for Halloween, part of her ongoing love for the Avengers (thanks, Gingie!). I didn't put a lot of thought into it -- she chose it, I double checked (maybe triple checked) with her before buying the costume on Amazon. She LOVED it, and I probably didn't let her wear it enough, although she got to wear it to the Halloween parade, Trunk-or-Treat and Trick-or-Treating, although she left the mask off most of the time because it made it hard to breathe and look around. She was also adamant that she was Iron Man, not Iron Woman or Iron Girl like some people said when they saw her dressed up.

I read a great post right around Halloween about boy choices vs. girl choices and how parents/society can be overwhelmingly proud of girls choosing a typically boy activity or costume. I admit a smug sense of pride that my girl isn't constrained by gender norms at this point as far as her Halloween choice was concerned. But the point of the article, which really resonated, is how girl choices -- a princess, Elsa, whatever -- are not inherently bad or worth less than a boy choice.

Here's what the author had to say:


It implies that breaking from the pack automatically makes you superior in some way. Sometimes the pack likes awesome shit because it’s awesome, you know? And it’s fine if you – or your kid – wants to like that awesome stuff, too. It’s like shaming someone for liking pop music because it’s popular. Shut the fuck up. It’s popular because people like it. You’re a people. Do the math, jerk.

Hammer meet nail head. (And the rest of her rant is good too.)

It is really what feminism is. Not tearing down the male, but building up the female. Demanding that they be seen as equal, which they intrinsically are. THIS is what I want to teach Jane and Livia ... all the subtleties and ultimately being a good, strong woman who likes what she likes.

(Another post that could use more consideration I'm sure...but hopefully you catch my drift.)
at November 18, 2016