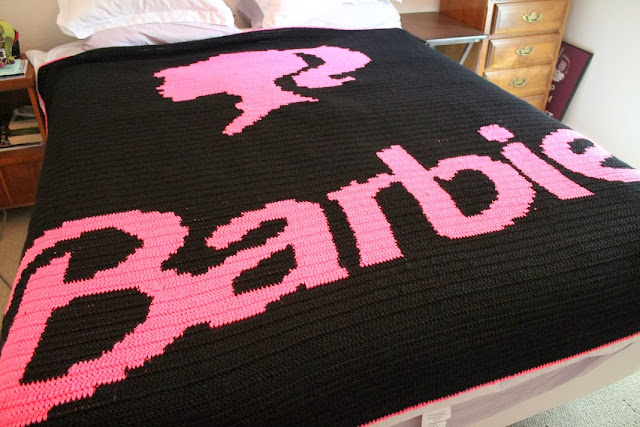 I made this huge afghan for my sister for Christmas. We opened presents together today due to a confluence of things, so she has it and loves it, so I can post about it! It's for her Barbie-themed guest room and is intended for a full-size bed, although this photo was taken on a queen size.

When I decided to attempt this project I couldn't find a pattern, so I made my own with a free online program called Knit Pro. Instead of filet crochet, where the pattern is made by leaving open squares, I decided to try changing colors and carrying the unused color behind. It worked out fine, as you can see, but it took about three tries to get started.

Also, the graph pattern that was created wasn't completely square, and neither are double crochets. I did two DCs to each block on my pattern, and the result was slightly squatty. It wasn't as obvious in the "Barbie" part and I worked from the bottom up, so by the time the silhouette didn't look as good as I'd hoped it was too late to turn back!

As I was working I kept googling and found some posts and suggestions about doing "interlocking" crochet, but it came too late for me in this project. I think it turned out really well for something that I just made up as I went along.

I finished things with a simple crab stitch/reverse crochet (my favorite edging). I used Red Heart yarn in black and pretty 'n pink.
at December 24, 2013

WOW! I came across this as I was looking for ideas for a blanket for my sister! This is awesome and Knit Pro is quite good for this I never thought of that!
Also your Blanket looks amazing, it looks like it's meant to be like that , I can't see any mistakes or anything that doesn't look RIGHT! So don't beat yourself up about it, feel proud as you should be that is some AMAZING work right there. Be proud! :)

So beautiful. You did an amazing job. I have been looking for a blanket to make my daughter for her 6th birthday and this is perfect do you have a pattern. And if so do you mind sharing.