About New York & The Book of Jonah 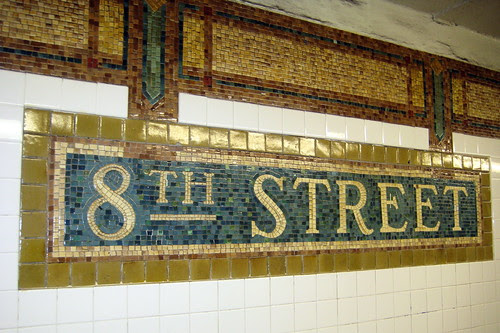 Yesterday, I took the subway downtown to Lisa's apartment. Because of track work and weekend schedules, I had to make 2 transfers and it took 50 minutes to get 2 miles (approx. 8 minutes by car via Google Maps). More than a little ridiculous, and I was so frustrated with the waiting and the stuffy heat of the subway.

Coming home was better, in part because of the wine, conversation and my new understanding of the Saturday night train schedule (although it may or may not be in effect next Saturday - one can never tell). It was a joy to spend time with Lisa, and so good to get out of the house.

Today I had a contrastingly brilliant experience with the city. I took the subway to church and the trains were right on time when I needed them - and I got to church 5 minutes early. The service was really good - about Jonah. A bus appeared when I needed it for the trip home (saves $2 because a bus ride is a transfer instead of a separate fare). There were interesting people to watch during the ride. I had a perfect NYC brunch - coffee, omelet (wow I didn't know how to spell that word) and The New York Times (link to the most interesting story, although it was a hard choice).

After brunch I went to Washington Square Park. It was perfect weather, slightly cool, able to sit in the shade and feel the breeze, which rustled the trees overhead for a really nice background noise. I could see and hear the newly re-opened fountain, and the rhythmic squeak of the swings on the playground. The bench where I sat had a sweet smell because of the flowers and trees - a stark contrast to the usual pee smell that infuses so much of NYC (either from man, beast or both).

Perhaps the best treat was a phone call I received - Owen called to remind me that he's coming (in one and a half weeks) and that I'd better get ready! I was able to have a talk with my Dad for Father's Day and catch up with my mom and sister. Technology is pretty sweet.

The sermon about Jonah was a straight telling of the book of Jonah. Afterward the pastor asked us three questions: 1) what did you know about Jonah before today? 2) Who is Jonah (or Jonah-like) today? and 3) Where are Nineveh and Tarshish today, not geographically*, but where does God call you to be in ministry and to where do you run? Deep, deep stuff. We actually talked about our answers in small groups. It was great.

The answer to 1) was mostly about the whale - that's what I remembered. And of course it wasn't a whale that swallowed Jonah, but a big fish. Maybe we're taught it's a whale in Bible School because it is just easier to imagine a whale being big enough to swallow a man (and the pictures all seem to show a whale)? Maybe it's just a flaw in the human memory. I don't know.

The answer to 2) is basically everyone or me. We're all like Jonah in that we fail to answer God's call and sometimes it seems so scary that we'll try to run to the ends of the earth to get away from what he's calling us to do.

And then 3) was the hardest and most personal. Because you have to LISTEN to God's call to be able to say where your Nineveh is. We also learned that Nineveh was a notorious city of sin - somewhere you wouldn't want to go even if you weren't being called there ... people were skinned if they displeased the king, and their skin would be turned into lamps! So maybe Nineveh isn't just a place like "the church" where we should be going, but it's somewhere we're averse to being but where we NEED to be to do God's work. And then the pastor threw in a thought - Tarshish - the place where we run from God could be the church! We go to church every week because it's the thing to do and where we can be close to God, with other worshipers but in some ways, if that act makes us think it's enough, that's a way we run from God's call to us. Yowza. I still don't have a strong idea of what I'm supposed to be doing, but that means that I'm definitely not doing it!

Our homework was to read the book of Jonah ourselves (only 4 chapters/two pages) and a section in Luke chapter 11 that references the Jonah story. I'll try to discern what it is that God is calling me to do. I challenge you to do the same.

*Geographically, Nineveh was in the middle of present day Iraq. And although there were several cities called Tarshish when Jonah was living, the one scholars are pretty sure is being referenced was on what is now the coast of Spain (basically as far as you could get from where Jonah started ... and at the end of the known world).