Fun at the stadium: 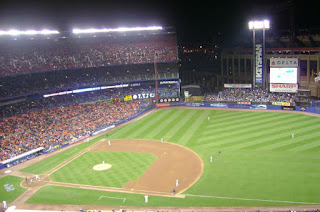 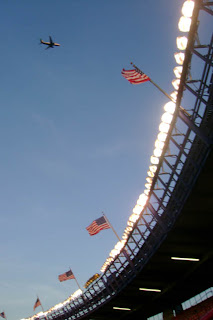 We went to a Mets game on Wednesday with Frank and Christel - two of Shawn's work colleagues. It was COOOOLD up there in the nosebleed seats, but it was so much fun. The train ride wasn't too bad on the way out there. We had "hot dogs" (which I repeatedly said in the New Joisey accent perfected by Lisa's British cousin Thomas during his recent visit to NYC) and a pretzel. Our tickets were only $3 each (the joys of being affiliated with NYU), so buying food seemed appropriate. The Mets were playing the Nationals. It was the day AFTER a guy fell to his death on an escalator, so we were extra careful to hold on and pay attention where we were going. The Mets one. Shawn, who doesn't really care about baseball, cheered for the Nationals. He was being funny. There were obnoxious high school kids sitting behind us. The stadium is in the flight path for planes going to/from La Guardia. I love the picture above with the flags and the plane. Owen will definitely enjoy a baseball game when he visits this summer.

The train ride home wasn't as easy. A kid was being stupid. He was with his parents and not holding on, and the train lurched and he fell backwards, stomping down HARD on my toe. Just what I need - a bruised toe in time for the wedding. My shoes are open toe. Luckily it didn't do any visible damage and I haven't really thought about it. But here's a tip - keep your feet tucked under your seat if at all possible during train rides.

I love 30 Rock for many reasons, one of which is Lemon says "Blugh."