Jane and I have been crafting a bit since she's been out of school for the winter break. We've mainly done Pinterest crafts that used paper plates, construction paper and pom poms. We've made a Santa face, a Rudolph and an ornament decorated with tissue paper. They've turned out really cute, and we have a couple more options to do (Christmas tree 1, tree 2 and chalk lights). 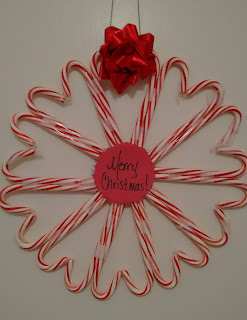 I attempted one craft myself - this Merry Christmas wreath made from candy canes. Unfortunately it's just a picture, and the comments on it are saying it doesn't work. I had to try twice -- the first time I miscounted so had two too few candy canes and some of my hot glue didn't hold. But I just finished try #2 and it seems to be holding up OK now.

I cut circles out of the candy cane box cardboard to make the center stabilizer. Also in the original picture you can see the tape used to connect the candy canes, so I did that first - taped them in sets of two/back to back. Then I used hot glue to connect the tips, forming the hearts. I added more tape for security (and where I broke the candy cane crooks - this is not a re-usable wreath for sure). I hot glued the cardboard circles over the middle - one on each side - and then glue sticked the construction paper "Merry Christmas" label on one side. I used my fancy edge scissors to cut around that one to make it look cuter, but I'm not sure that's visible in the picture.

I used a piece of glittery black string that I have from Gran's crochet stash and threaded it through the top and taped it behind the door/inside the closet to hold up the wreath (you can see that better in the original). I added a random red bow to the top, but I'm not sure it's going to stay with just the tape, and it isn't necessary. I also taped a few of the candy canes to the door to keep the wreath from flopping around when I open the closet (I rarely need to get in the linen closet, but now there's a delicate wreath there I'm finding I need stuff constantly!).

Hopefully it will last three days until Christmas, and it's a small investment so no worries if it doesn't last. It's just going to be tossed anyway. Total cost was $2 for the candy canes ($1/box) and I had everything else on hand. I'm not sure how much the glue gun sticks cost because I'd bought them for another project, but I probably used 2 or 3 per try so 5 or 6 total. Economical and cute!
at December 22, 2015

i like this blog, elegan anda clean.. a'm wait you'r also visit my blog http://tentangwebsites.blogspot.co.id thanks so much.