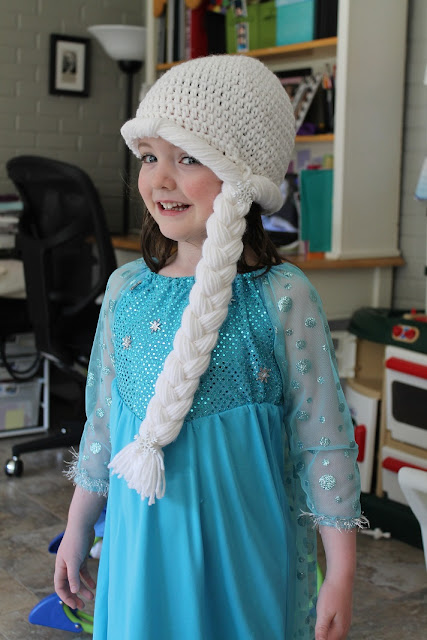 Jane had a princess party last week (at Build-a-Bear - such a fun party, although I'm sure expensive for the birthday girl's family since every kid got to pick out a bear and outfit!). Jane already had this Elsa dress (made by my aunt), and I thought it would be fun to make her an Elsa hat/wig.

I googled for inspiration and found a pattern of sorts at Repeat Crafter Me. I used my own basic hat pattern (I've made enough that it's second nature to do the bases) using half double crochets. Then I added a folded over piece of loooong yarn to each stitch in the last row, swooped them all to the side and braided. I had Jane wear the hat while I braided, and I'm not sure I could have braided otherwise. She was also helpful holding the yarn as I swooped/twisted the back and then the front before bringing them together to braid.

I bought some snowflake buttons for $2 at Walmart (Christmas snowflake decorations would have been bigger/better, but the Xmas stuff isn't out yet). I sewed on two at the last minute and away we went to the party!

Jane got loads of compliments on the hat, and I'm really proud of it. She wore it the whole party even though it was pretty hot in the store. When I took the hat off it had pressed around her head a bit where the hair was, so I think if I made this again I'd make the hate a smidge bigger -- maybe a half round extra increases -- because the hair swoop tightens it a bit.

Fun for dress up play, and I'm sure it won't be hard to make a coordinating Anna hat/wig. Maybe for baby sister?!
at October 03, 2016