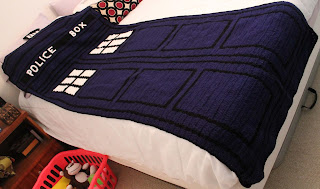 I made this blanket following this Blue Police Box pattern from Sandra Petit. It makes a really tall/skinny throw, and I think adding some background to keep the finished product rectangular and a little wider would be a good idea. The light at the top seems off to me too, and a background edging or something would fix that right up. Otherwise maybe leaving out a few of the rows in each box to make it a little less tall and seem more properly proportioned.


I added Moogly alphabet letters for the POLICE BOX part - I can’t cross stitch very well. I used cotton thread and a small hook to make the letters to fit.

I used a darker blue than suggested in the pattern (mainly because it’s what I had on hand to start with.) All of the worsted weight yarn is Red Heart, and the white thread is something I had on hand that no longer has a label.

It took me a few months to finish, mainly because of the monotony of double crochets so I would put it down for a while. I also had trouble keeping the yarn tangle-free, especially in the "window" sections, when I had three colors going. I did not cut yarn at every change, so the blanket is probably even thicker than normal because of carrying yarn on almost every stitch.

When I finally give it to Gingie (it's a present for my mom) I think she will like it! I did tell her it was done and showed her a picture of it before I wrote this post.

(I should really clean up around my guest bed before I take pictures to post on the internet. Good grief!) 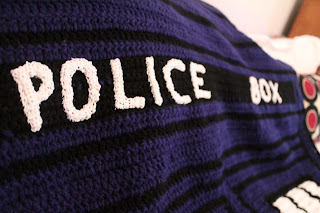 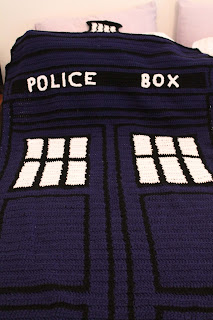 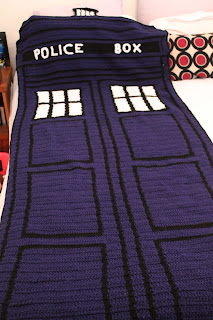 Amazing. I love the Moogly letters. And can't wait to see it in person.